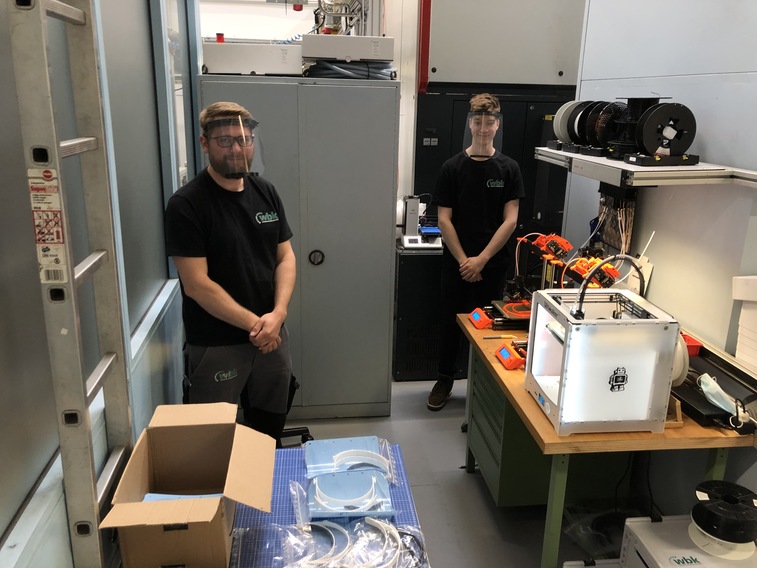 The St. Vincentius-ViDia Kliniken in Karlsruhe asked the wbk - Institute of Production Science of the KIT for support: The doctors need at least 100 plastic visors as soon as possible. These are worn by the nursing staff and the physicians on normal hospital wards - in addition to the prescribed breathing mask - during direct contact with patients infected with COVID-19. In this way they protect themselves against direct droplet transmission by the patients.

Currently, such aids are hardly available on the market and then only at greatly inflated prices. The scientists have therefore started to produce a test series of visors in cooperation with the University of Karlsruhe. An important element for the production of the visors are 3-D printers, which are normally used in prototype construction and for research purposes in the field of additive manufacturing. The visors are manufactured with about 30 3D printers, now at a required time of about three hours per piece. The printing process used is the so-called Fused Deposition Modeling (FDM). Here, plastic is melted in a print head and applied in thin layers on a building platform.

Initially, the scientists use all the tools that were available for production: Transparent cover sheets for scientific theses served as the 'viewing area' of the visors and were simply perforated so that a rubber band could be threaded through them. The Institute for Production Development (IPEK) of KIT then supported with a laser cutter. Thus, the shields can now be cut to the appropriate size and a more stable PET plastic film can be used. A disinfection stand would also be available at the HS Karlsruhe, but the clinic itself would take over the disinfection of all visors. Other institutes (such as the ISTM) also participated. The scientists have so far been able to deliver 199 260 masks to the Vincentius-ViDia hospitals. Another 60 are to follow soon on Thursday. "We are very pleased and grateful for the excellent and unbureaucratic cooperation with the KIT and its partners. In this extraordinary situation, it is encouraging to see how rapid support by local institutions is possible," said Richard Wentges, Chairman of the Board of Directors of ViDia Christliche Kliniken Karlsruhe.

In addition, the wbk was able to deliver 140 visors to the German Red Cross District Association Karlsruhe e.V., which would like to use them to equip the more than 80 emergency aid units of all aid organisations in the city and district.

Of course, this is not a process that is suitable for mass production and no certified medical aids are produced here - this is also not the goal. But the Karlsruhe scientists agree that in view of the current challenges, they want to make a small contribution to the common good and provide voluntary support wherever possible. This kind of unbureaucratic help is particularly important for the hospitals so that they can concentrate on the care of their patients.

There are many such spontaneous initiatives in the Karlsruhe region in which cultural or scientific institutions provide voluntary support. For example, the FZI Forschungszentrum Informatik has already handed over 275 visors from the 3-D printer to the Städtisches Klinikum Karlsruhe.


last change: 2020-04-15 KIT – The Research University in the Helmholtz Association